You can grab Samsung’s flagship Galaxy S7 Plus Android tablet for £679.00 thanks to this brilliant early Black Friday deal.

The deal sheds a massive £120 off the tablet’s regular RRP. This is a huge 15% discount on one of the best Android tablet’s currently available, with it scoring an impressive 4/5 recommended when we reviewed it.

If you want a top end tablet that can double as a laptop, mobile sketch station and entertainment hub, but don’t fancy an iPad Pro, make no mistake this is the one to get. 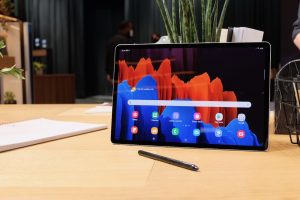 Samsung’s flagship iPad Pro rival, the Galaxy Tab S7 Plus, has just had a massive Black Friday discount. Grab it while stocks last.

The Galaxy Tab S7 Plus is Samsung’s answer to the iPad Pro. The device features a similar form factor, digital stylus support and features an optional keyboard cover that lets it be used in a laptop form factor.

During testing we also found it goes toe-to-toe with the iPad at a hardware and performance level.

The Super AMOLED, 12.4-inch offers wonderfully deep blacks, accurate colours and features an adaptive 120Hz refresh rate, which is rare on Android tablets. This makes it fantastic for everything from drawing in Krita to triple-A gaming on Game Pass and GeForce Now.

The Snapdragon 865+ CPU also ensures it can run pretty much every app and game on the Play Store with zero issue.

This led deputy and mobile editor Max Parker to conclude in his Galaxy Tab S7 Plus review: “This is by far the most accomplished high-end Android tablet I have ever used, with the finest display you’ll find on any mobile device.”

Samsung’s flagship iPad Pro rival, the Galaxy Tab S7 Plus, has just had a massive Black Friday discount. Grab it while stocks last.

As you can see in the Keepa graph below, the tablet’s price does have a tendency to fluctuate, but this is the best price we’ve seen in the last two months. With the tablet entering the end of its life cycle it’ll also likely be your last opportunity to pick one up, so we’d thoroughly recommend taking advantage of the deal now if you need a top end Android tablet.

The Galaxy Tab S7 Plus is one of many products to get an early Black Friday Discount. The event isn’t scheduled to start until this Friday, but since November began we’ve seen a steady stream of great deals on everything from top end OLED TVs to Samsung Galaxy phones.

Make sure to keep checking back with Trusted Reviews as our team of product experts will be searching the stores to offer you their curated picks of the best Black Friday deals throughout the event.

Google Pixel 6a tipped for Pixel 6 performance but downgraded camera