Avalanche has grown steadily this year and competes with Ethereum by developing its DeFi ecosystem. It is the fastest-growing smart contracts platform in the blockchain industry. It can be used to solve various problems in enterprises, institutions, and governments, including debt financing and asset insurance.

Avalanche was launched by Ava labs, which was founded by Emin Gun Sirer, a Cornel University Professor. It has integrated various Defi projects like Reef, bZx, SushiSwap, and Securitise. It is also collaborating with the Ethereum network, which will allow transfers of assets between two chains.

AVAX is a native coin of the Avalanche network, secures its position among the top 15 cryptocurrencies, and has a market cap of $21.5 billion. The total number of coins is 720 million. Among the consolidation of the crypto market, AVAX is only in the top 20, which has shown an uptrend. 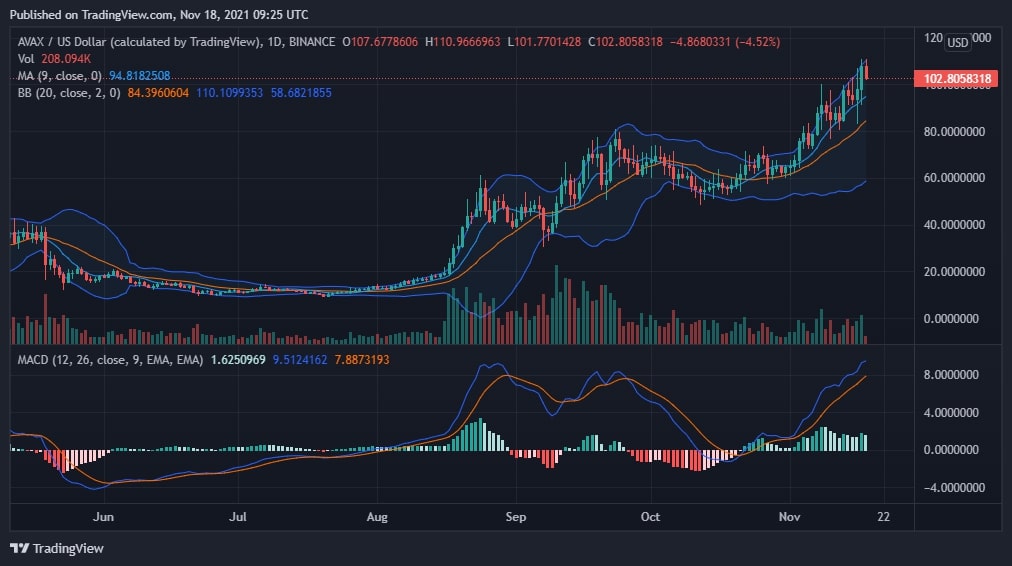 Now, in any case, if the AVAX price consolidates, it may not cross the $80 stop loss. However, if you have the holding, it is time to enjoy the ride.

The daily chart of AVAX/USD is bullish. The Moving Average is leading the trend along with the Bollinger Band. The last few candlesticks are above the baseline of BB and MA, which is a strong bullish signal.

The MACD chart is bullish, the blue line is far above the red line, and it does not show any signs of bearishness. The RSI is strong, around 68; anything between 60-40 is considered good. However, it is 68 and continuing its bullish run. It is safe to say that RSI is also reflecting bullish signs.

Avalanche has integrated the DeFi system, which is the future of crypto networks, and AVAX is one of the forerunners of this system. It has the potential to reach the top 10 cryptocurrencies.

Is it the right time to invest in this crypto? Indeed, it has a strong future potential, and it is continuing its bullish run as per our Avalanche price prediction. You should enter the market and join the party.