This Hisense Roku A7200G 4K TV is exclusive to Argos and has been reduced to £349, but with a discount code you can get it even for even less.

Use the code TV10 during the checkout process for the Hisense Roku A7200G and it brings this 50-inch TV down to around £314. That’s the cheapest we’ve seen this size since the TV went on sale. 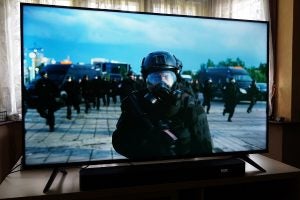 Get this Hisense Roku 4K smart TV before it goes

This Hisense Roku is exclusive to Argos, and with the code TV10, you can get it for even cheaper than its £349 asking price

The A7200G replaced the similarly good R50B7120UK, scoring 4.5 stars when we reviewed it in April 2021. We said that “while not a huge upgrade over the original in terms of picture or sound, the Hisense R50A7200GTUK Roku TV maintains its fantastic budget performance. With enjoyable picture quality, lots of streaming features and free content, this is an affordable TV with a wide appeal.”

Build quality is on the basic side, but you don’t buy TVs to stare at their construction. With this Hisense Roku model you get three HDMI inputs, enough to plug in a games console, set-top box or 4K player. Wireless connectivity includes AirPlay 2 streaming, and it also supports Alexa and Google digital assistants when connected to a compatible external speaker.

The Roku smart OS is the headline feature with this TV. You get an app selection that’s more comprehensive than most budget TVs, with all the major apps onboard. Freeview Play integration is accounted for, which means all the UK catch-up and on-demand apps can be found, too.

Roku OS also offers free content through the Roku Channel, where you can find old classics, reality TV and pretty much every Gordon Ramsay series there. And Roku has moved into the original programming, so there’s plenty more content to be mined, starring the likes of Kevin Hart, Idris Elba and Anna Kendrick.

Get this Hisense Roku 4K smart TV before it goes

This Hisense Roku is exclusive to Argos, and with the code TV10, you can get it for even cheaper than its £349 asking price

Gaming input is 11.8ms, which is fast for an affordable tellie. This doesn’t have the advanced gaming features that a PS5 and Xbox Series console needs, but you won’t be buying a TV for those features anyway.

Picture quality impresses with a colourful, detailed picture. While HDR skills are not in huge abundance, the Hisense Roku serves up an appealing image.

For more of the best Black Friday deals, check out our dedicated hub.