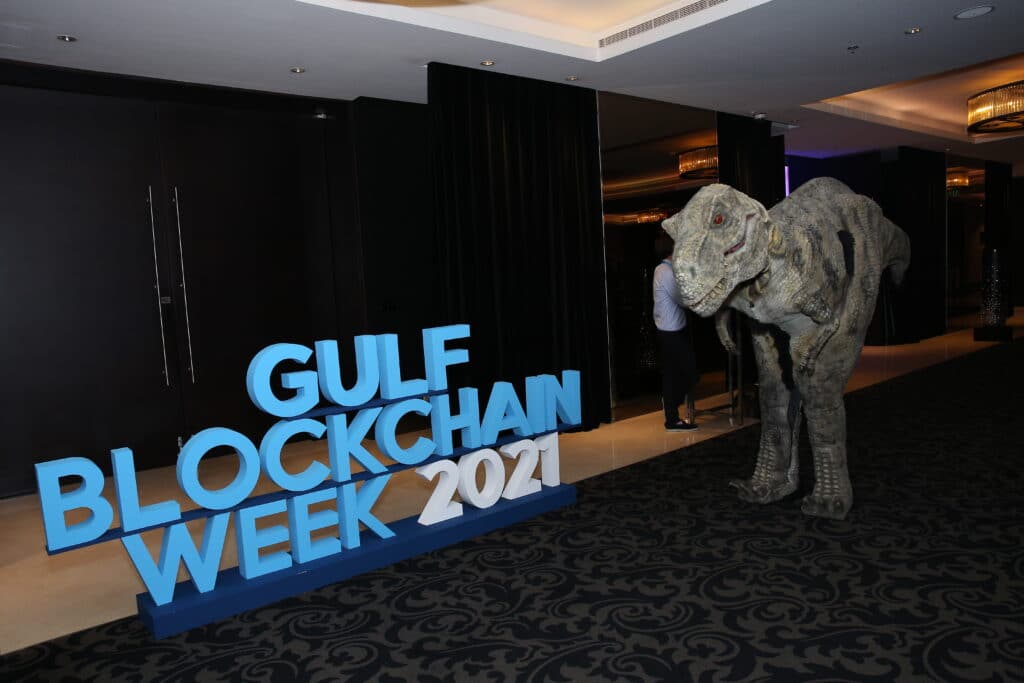 Followed by a grand opening Ecosystem Party evening organized by CV Labs on October 10, Gulf Blockchain Week opened the doors of a spectacular NFT art exhibition by NFT BAZL, GDA Capital, and Elitium. Thanks to a partnership with the iconic Dubai International Financial Centre (DIFC), the leading financial hub in the Middle East, Africa, and South Asia, attendees were able to bid on one of the world’s first mural NFTs.

Ahmed Bin Sulayem, Executive Chairman and CEO of DMCC opened up the day welcoming the event attendees and participants to Dubai, the amazing and bright spot on the Middle East technological map. After the investment panel powered by CV Labs brought on a stage a star line up and brought up important aspects of having a proper investor’s mindset and navigating the world of blockchain projects.“Blockchain industry today involves so many important topics, and we’re happy to cover the range of themes that the Gulf region is engaged with today during the greatest event of the month, Gulf Blockchain Week,” says Juwan Lee, Founder and Chairman of NexChange Group. “Dubai’s efforts related to Fintech, NFTs, enterprise blockchain and so many more definitely help to build bridges to international technology and business hubs.”

Jorge Sebastião, Co-Founder EcoX, Co-Founder, CEO, GBO, “October 2021, was amazing both for the start of Expo 2020 in Dubai, Blockchain and Crypto in Dubai with over 50 events, and Gulf Blockchain Week and EcoX being key drivers in adoption & ecosystem building. Key thought leaders and influencers converged in Dubai to make it a leader in worldwide adoption of this leading technology.”

Nick Spanos, Steve Chen, and Michael Terpin delivered inspirational keynotes, and the afternoon was heated by a panel on DEXs and CEXs, followed by a fireside chat between famous proponents of Bitcoin and tokenized gold.

Digital payments, asset management trends, and new investment vehicles were covered by esteemed panelists from around the world. The day concluded with a featured panel on investment and regulation efforts in the MENA region.

October 12, featured panels on DeFi, blockchain security, AI and IoT, SDGs, smart government efforts, and asset tokenization challenges. The day kicked off with discussing community building and real traction for blockchain projects, followed by an inspirational speech by David Do, Co-Founder and CEO of 5ROI Global, and with another full-house attended a session on NFTs happening in the afternoon.

“One of the building blocks of Dubai’s current status as the region’s tech and business hub is its attitude towards blockchain, a technology that now powers the global digital development,” notes Shailen Bhatia, Managing Director of Evolution Group. “I would like to extend my gratitude to everyone who made the recent Gulf Blockchain Summit a success. We had over 1400 people in attendance with a fantastic line-up of speakers and enriching panel sessions. A big shout out to everyone involved in making this a success.”

A true highlight of the day was the panel on one of the few and definitely the most fascinating use cases of blockchain for trade finance, UAE Trade Connect, featuring the platform’s CEO, two banks onboard and a representative of Dubai Customs.