The Guardians of the Galaxy game on PS5, PS4 and Xbox has just dropped in price for Black Friday and it’s the perfect stocking stuffer this Christmas.

If you’re looking to get ahead of the curve with your festive shopping, we’ve found a great Black Friday deal that will solve your Christmas dilemma.

Marvel’s new Guardians of the Galaxy video game just dropped in price by over 50% to just £27.99.

This deal comes via the Currys store on eBay and it’s available on a multitude of platforms, including the PS4 version which includes a free PS5 upgrade. 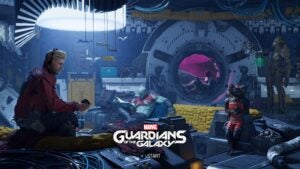 Marvel’s own Guardians of the Galaxy video game has seen a big Black Friday discount on PS4 and PS5, coming in at just £27.99 from the original RRP of £59.99.

Square Enix took the lead with this game, developing a truly engaging story that will have players on the edge of their seats. We won’t spoil the ending for you, but know that our own reviewer Thomas Deehan claimed that Guardians has the best story of any Marvel game to date, and since it plays similarly to a Telltale game, there’s plenty of replayability here.

Looking a little closer at the gameplay, it takes on the form of an over-the-shoulder brawler that has shooter and real-time strategy mechanics thrown in, so you’re getting a mixed bag in terms of what you can do.

You take control of Star-Lord for the whole game but you can direct teammates during combat, with special moves for each combatant to keep things interesting.

Our review also mentioned that the gameplay feels intrinsically linked with the progression of the story, with both the characters in-game improving as well as the players, giving the game’s ending a satisfying conclusion, both in terms of story and gameplay.

Marvel’s own Guardians of the Galaxy video game has seen a big Black Friday discount on PS4 and PS5, coming in at just £27.99 from the original RRP of £59.99.

We gave the Guardians video game a 4/5 stars rating, with some of the standout points being the fantastic story as well as the wonderfully detailed environments and planets you get to travel to.

If you’re interested in more great Black Friday deals that can help alleviate that Christmas rush, look below for even more cracking deals, covering phones, wearables and, of course, video games.