You’ve probably heard it plenty of times in the past few weeks, but Black Friday is coming and the deals are intensifying with Philips’ PUS9006 LED TV the subject of a cracking deal.

The 58PUS9006 is exclusive to Currys and the online retailer has given it a discount, lopping £250 of the asking price and reducing it to £699. 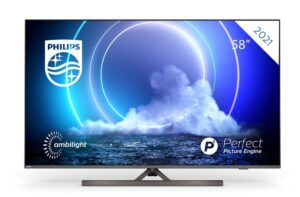 Now while this TV is no OLED, just an LCD LED, it still strikes us as a cracking deal as you’re getting a big screen telly (all 58-inches of it) for less than £700.

And it comes with a tonne of features. The set is based on Philips’ The One, with the same build quality, slightly different stand but new metal grey finish. Though on the product page it says it supports HDMI 2.1 across all inputs, we are under the impression that it is in fact HDMI 2.0.

“The One” is Philips’ affordable but feature-packed TV and the PUS9006 is similarly stacked for features. It packs Philips P5 Perfect Engine processor that handles sharpness, contrast, motion and colour, optimising the image to produce spectacular looking images, whatever the source

When it comes to HDR, the PUS9006 can handle any content you fling its way with support for HDR10, HLG, HDR10+ and Dolby Vision. That means it can wring the best out of video streaming websites such as BBC iPlayer, Amazon Prime Video, Netflix and Disney+.

With Android TV, there’s all of Google’s smarts in the Google Assistant digital helper, Chromecast for streaming from a mobile device and the thousands of apps to choose from in the Play Store. Works with Alexa certification means you can control the TV by connecting it to an Alexa speaker.

Ambilight is available in its four-sided iteration, the colours on screen are casted onto the surface behind it from the top, bottom and sides of the TV. The effect, especially in a dark room, makes for an immersive viewing experience.

With multi-HDR support, wide app selection via Android TV and Ambilight, this is a pretty cracking deal on one of Philips’ more feature-packed LED TVs.

And if it turns out you’re not a fan of the TV (and why wouldn’t you be?), then Currys is extending its Christmas returns programme. Any item bought from the retailer up until 24th December 2021 can return their product until the end of the day 14th January 2022.

For more of the best Black Friday deals, check out our dedicated hub as it fills up with more deals ahead of the big weekend.