Razer’s Kraken X headset is one of the best budget headsets money can buy, and this early Black Friday deal from Amazon makes it even more worth your while.

If you’re in the market for an affordable gaming headset with plenty of compatibility and decent audio, then we’d suggest picking up the Kraken X pretty sharpish. 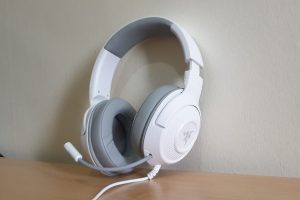 Razer’s brilliant Kraken X headset has seen a pretty substantial price cut for Black Friday, being available to purchase for just £26.29, offering up a near 50% decrease from its £49.99 RRP.

The Razer Kraken X acts a nice mid-range option within Razer’s rather vast Kraken headset line, offering up some decent all-round audio, although its low-end punch isn’t as prevalent as on other Razer headsets.

To make up for this hollow bass, the Kraken X features Razer’s virtual 7.1 surround sound that can provide much higher levels of immersion and increasingly accurate audio positioning. This is definitely handy for when you’re indulging in some FPS games and you need to listen out for enemy footsteps. Just note the virtual surround sound is only available on PC.

Their primarily plastic construction is sturdy enough for the price, and there’s some decent levels of padding too to make them both comfortable and provide some good passive noise isolation for the money. The Kraken X also delivers in the microphone department with plenty of clarity enabling your voice to be heard loud and clear to your friends over Discord, or other platforms.

Device support for the Kraken X is also outstanding, with it being designed to work with not only your PC, but if you’ve got a Nintendo Switch or a PS4, then this headset should work pretty much immediately.

“The Razer Kraken X is a good mid-range headset that gets most of the basics right: it’s comfortable, sounds decent and has a great microphone. Unfortunately, its poor bass performance doesn’t bode well for action and shooter games, where loud and deep explosions are the norm. If you want a blockbuster audio experience, you’ll need to pay more. Otherwise, this remains a great value gaming headset.”

Razer’s brilliant Kraken X headset has seen a pretty substantial price cut for Black Friday, being available to purchase for just £26.29, offering up a near 50% decrease from its £49.99 RRP.

For the money, it’s hard to argue with what you’re getting with the Kraken X anyway, but this 47% reduction just makes it all the more appealing. With such a low price, it’s unlikely that this deal will be around for too long, so be sure to take advantage it whilst you can.

And, be sure to check back with the expert team here at Trusted Reviews as we’re constantly searching for the best Black Friday deals to bring you.